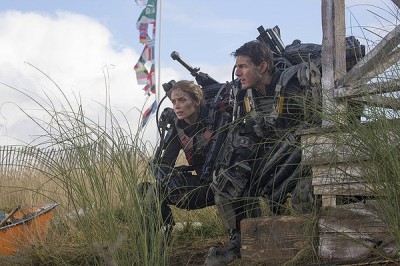 I'm going to save you some trouble. Yes, Edge of Tomorrow is just like Groundhog Day. Apparently this has been hard to suss out for some, given the fact that one person blurted out that fact 45 minutes into the movie. Some folks laughed, some had it click for them, too, and just didn't admit it. Because Edge of Tomorrow is like Groundhog Day, but Groundhog Day where the main character is at war with an alien race trying to take over the planet Earth. And unlike Bill Murray, he doesn't quietly go to bed each night to wake up and to relive the same day over again until he gets the girl to fall in love with him and gets on the right path; in Edge of Tomorrow, Tom Cruise has to die for his day to start over. His challenge is to get through the next 24 hours alive. And to save the human race.

Based on a Japanese novel called All You Need is Kill, Edge of Tomorrow is a science-fiction actioner about a near future where a hostile race of predators crashes into our world with the aim of taking it over. The earthlings have been getting slaughtered by these deadly beings. They look like an octopus made out of chainsaws and have been dubbed "Mimics" for their ability to observe human behavior and copy it. This is a primary reason for why they are beating us: they've learned how we fight.

The tide of battle is turning, however, thanks to an advanced combat exoskeleton that is allowing humans to move and fight differently. One particular soldier, nicknamed the Angel of Verdun, is the poster girl for this armor. Her given name is Rita (Emily Blunt, Looper), and she earned her nickname by leading the charge in mankind's greatest victory, an assault on the alien hordes at Verdun. This victory happened before the beginning of Edge of Tomorrow, and the public relations campaign has been put together by a slick customer named Will Cage (Cruise). As the story picks up, the forces of humanity are going to launch a major strike against their enemy on the beaches of France. Cage's bosses want him on the frontline; he's a coward who would rather be sitting behind a desk. This is not his decision to make.

Needless to say, that first day becomes a disaster for Cage. He dies a horrible death, only to find himself back at the army base where his troubles began. I'm not going to get into the mechanics of how or why this happens, as that is part of the adventure for audiences. We will figure out what is going on while Cage does, as we watch him adapt to each do-over and figure out how to stay alive, what is happening to him, and what needs to be done to make it all stop. Eventually Rita will be along for the ride, providing him back-up and friendship. Though the how and the why of that is for you to discover, too.

And that is something you very much want to do. Edge of Tomorrow is an absolute corker of a film. Directed by Doug Liman (The Bourne Legacy, Mr. and Mrs. Smith), with a script by Christopher McQuarrie (Jack Reacher, The Usual Suspects) alongside Jez and John-Henry Butterworth (Fair Game), Edge is a creative summer blockbuster, full of humor, excitement, and even an emotion or two. The aliens are interesting to look at, and the computer effects are spectacular. (The 3D, outside of a few tricky shots in the first 1/3 of the film, not so much.) Though the film is structured like a video game, with Cruise's soldier running at the same level again and again to get it right, it transcends the comparison by smartly knowing what to leave out in each redo. Once the rules are established, the story often advances off screen, allowing Liman and his team to keep Edge of Tomorrow thundering along at an impressive pace. It could just be bodies piled on bodies, an endless montage of kill shots, but Edge of Tomorrow is smarter than that. Yes, like Groundhog Day, it takes the gimmick and builds something with it, allowing the audience to fully invest in what is happening and who it's happening to.

Blunt and Cruise make a great pair. On his best days, Cruise can still tear up any movie screen. Playing against his cocky image for the start of the picture allows the star to remind us of what an excellent performer he can be. He takes Cage on a convincing and ultimately satisfying arc from slimeball to champion. On the flipside, Blunt starts hard and only grows vulnerable the deeper Rita gets into this with Cage. Though perhaps best known for romantic comedies (The Five-Year Engagement) and period pieces (The Young Victoria), Blunt actually has quite a future as an action start if she wants one. Once the partnership is established, Rita is there with Cage every step of the way--unless she's one step ahead of him.

Liman seems to have a natural instinct for how long to let scenes roll, where to let the tension build and where to release it. He and editor James Herbert (Sherlock Holmes) move nimbly through the material, knowing which thrills to separate and leave on their own and then when to chop them together, adding to the adrenaline by unleashing the shredder on a particular set of sorties. Some of the runs, both on the battlefield and in training, are simultaneously brutal and brutally funny for how swiftly Cage loses his life. That these are done without ever being grisly, revolting, or mean-spirited is truly remarkable.

This talent for knowing where the surprises go means the filmmakers also know when to shift the story and change the goal when it counts, avoiding a final act that is either redundant or expected. It makes for a rousing finish, but not a simple one. A complicated story deserves no less in its resolution. In that, Edge of Tomorrow does not disappoint. Nor does it really disappoint anywhere else. It's a CGI-laden shoot-'em-up that hits every target.