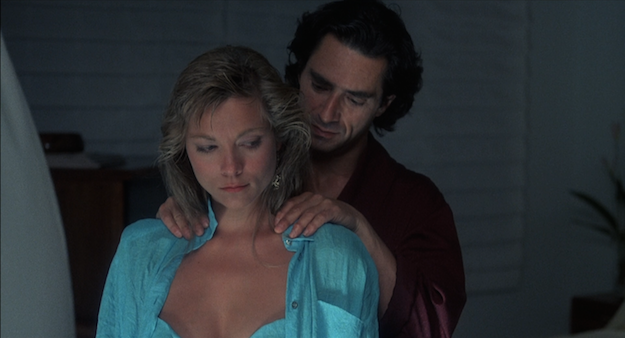 The 1987 thriller Black Widow, as the title suggests, tells the story of a woman who repeatedly marries for money then offs each new hubby. She's no dummy either; she makes sure it always looks like an accident or natural causes. The plot harkens back to the film noir era, where untrustworthy women were the norm, and anticipates a run of popular movies built around female psycho killers, including Fatal Attraction, Single White Female, and Basic Instinct. Screenwriter Ronald Bass (Rain Man) and director Bob Rafelson (The Postman Always Rings Twice) keep things entertaining, stylish, and fairly cliche-free, but the film's two leading ladies are the real attraction.

Theresa Russell (Bad Timing, Insignificance) plays the title character, whom we'll call Catherine, even though she never settles on one identity, one location, or one marriage for too long. Debra Winger (Terms of Endearment, An Officer and a Gentleman) plays Alex Barnes, a Justice Department agent on Catherine's trail. Alex has only been a desk jockey to this point, but now she is looking to get out in the field. The moment to do just that presents itself when Alex stumbles across a series of deaths that no one else finds suspicious but her. Two wealthy older men die from a rare disorder that causes them to stop breathing in their sleep. In both cases, the young wife inherited and disappeared.

After correctly identifying Catherine but failing to stop her from striking a third time, Alex goes all out and follows this serial poisoner to Hawaii. Alex finds Catherine in the midst of ensnaring wealthy hotel magnate Paul Nuytton (Band of Outsiders' Sami Frey) and manages to insinuate herself into Catherine's life. A not-so-chance encounter between the two ladies at a scuba diving class (led by, of all people, Eating Raoul's Mary Woronov) turns into an friendship that is oddly genuine in its way, although clearly neither woman trusts the other -- and they both have very unfriendly ideas of what they'd like to do to each other.

Russell is appropriately seductive as the calculating Catherine, but Winger gets a much trickier role that she pulls off beautifully. Alex is a workaholic who is being told by everyone around her that she needs to lighten up. This Hawaiian excursion simultaneously demonstrates her growing obsession with the job and offers her an opportunity to live as she never has. Catherine gives Alex nice clothes and invites her to fancy parties, and Alex can't help but find herself being seduced by Catherine and her lifestyle a bit. Without laying it on too thick, the film puts Alex in a place where she has to figure out if she is pursuing Catherine out of duty or out of jealousy. Unsurprisingly, it's that minor indecisiveness and vulnerability that Catherine plans to exploit to get the better of her would-be jailer.

The film also benefits from a surprisingly stacked supporting cast. Dennis Hopper and Nicol Williamson are delightful as two of Catherine's targets. Hopper is an outsized Texas toy tycoon while Williamson is an introverted antiquities expert. Diane Ladd tastily chews a little scenery as Hopper's money hungry sister. Terry O'Quinn, who similarly went through spouses like used tissues that same year in The Stepfather, appears here as Alex's boss, who either shares a romantic history with her or is just incredibly inappropriate in the workplace. James Hong and Leo Rossi, two actors whose faces you probably know better than their names also are on hand, as a P.I. with a fatal flaw and a vaguely misogynistic police detective respectively. Playwright David Mamet, who wrote The Postman Always Rings Twice for director Rafelson, has an amusing cameo as a poker-playing fed.

As appealing and well-acted as Black Widow is, its storytelling is too frequently superficial to be truly gripping. The film has Alex make a vaguely meta joke about how the psychology of the killer is unimportant. It's a refreshing acknowledgement that the filmmakers won't take the time to assign some random traumatic past to Catherine's character as an expository explanation for how she became a killer. Unfortunately, they employ a similar attitude to the character's present state of mind and it feels like a cop-out, making Catherine less often mysterious than just vaguely sketched. Catherine gives Alex a solid kiss on the lips late in the film, and it's a puzzling stand-alone moment that hints at aspects of both characters that should have been more fleshed out. The insinuating approach the filmmakers use instead does not completely hobble the film -- which is admittedly fun, with no dead spots -- but it dulls the impact of the film's final act, in which prey and predator are finally forced to confront each other. What should be nailbiting is instead just somewhat worrisome. 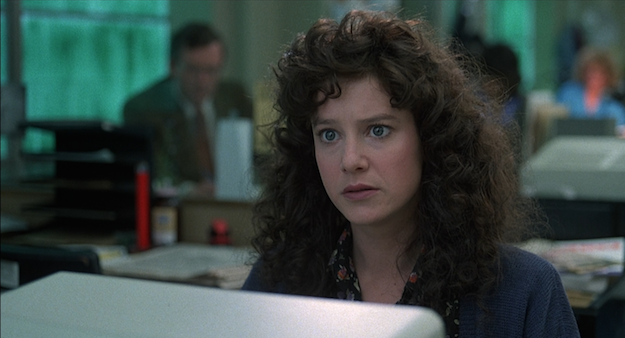 The Blu-ray
Black Widow comes in a limited edition of 3000 copies. The disc is packaged with a color booklet featuring an essay by Twilight Time's Julie Kirgo.

The Video:
This new AVC-encoded 1080p 1.85:1 transfer is solid, a little soft here and there, but with typically strong detail and natural looking color. Famed cinematographer Conrad Hall tosses around a fair amount of noir-style shadows, and the blacks are rich but with good shadow detail. There are sporadic dirt marks and specks, but you'll most likely miss them if you aren't looking for them.

The Audio:
The musical score by thriller expert Michael Small comes out sounding the best in the DTS-HD MA 2.0 stereo mix, with the dialogue coming off a little dull in comparison. This is presumably how the film has always sounded, and the content of the dialogue is always clear and discernible, but it just lacks a little oomph. English SDH are also provided for your reading pleasure.

- A decent listen, with TT's in-house experts giving their read on the film and offering various trivia tidbits. This track is little light on insight compared to many of TT's other in-house commentaries, but it'll do if you don't have a friend with whom to watch the movie and then chat about it afterward.

Black Widow is a solidly made cop-vs.-serial-killer thriller that stands out by placing two women at the center of its conflict. Casting the supremely talented Debra Winger and Theresa Russell as those characters doesn't hurt either. While the script lacks a little in depth, the strong performances make this easy to watch. Recommended. 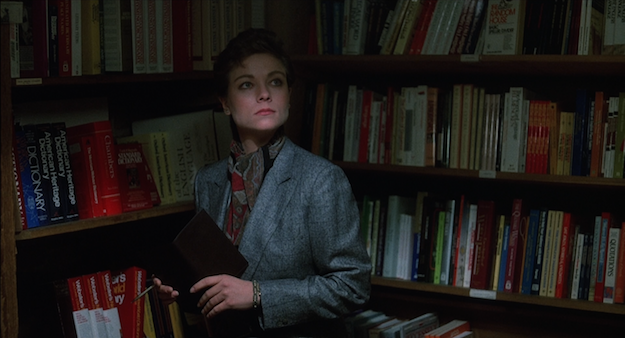