Paramount // Unrated // September 20, 2016
List Price: $29.98 [Buy now and save at Amazon]
Review by Stuart Galbraith IV | posted January 11, 2017 | E-mail the Author
It took nearly two years but CBS/Paramount has finally gotten around to releasing Gunsmoke: The Twelfth Season (Volumes 1 & 2, 1966-67), the series' sixth year after transitioning from a 30-minute show to an hour one, and the first in color. I don't know but suspect previous seasons were remastered gradually, but that there was a general commitment to the show's black-and-white years. By the time the black-and-white seasons were done, the market for DVD has slipped to the point where the remaining nine seasons, all in color, remained in limbo for a time. Possibly the label is anxious to see how this two-volume set will sell before making a decision on the remaining seasons, perhaps hoping the allure of color shows on DVD for the first time will give it the little boost it could probably use.

In any case, episodes look great, far superior to the handful of color shows released as part of a 50th Anniversary sampler more than ten years ago. Gunsmoke as a show has changed subtly over its first dozen years in ways beyond all those format changes, but its best episodes are still among the best TV Western drama around.

The format changes presented its share of challenges. Compared to today's standard 22-24-episode season run (with cable series having even shorter "seasons" of as few as 10 episodes) with 40-minute running times (minus the commercials), Gunsmoke, during its 1966-67 season, cranked out twenty-nine 51-minute episodes (down from 32 the previous year) airing between mid-September and early-May. With that kind of grueling production schedule, it was impossible to prominently feature star James Arness in every episode - he would have dropped dead from exhaustion.

The series, the first "adult" Western when it debuted in 1955, was the number one show in the country during its third through sixth seasons, and remained in the Top Ten for the next two years. But the format changes and its graveyard timeslot (Saturday nights at 10:00pm) hurt the show, and by its twelfth season the show had slipped to 34th place in the ratings. CBS decided to cancel Gunsmoke, but viewer outcry and a famous intervention from the Gunsmoke fan wife of CBS head William Paley earned Gunsmoke a last-minute reprieve (resulting in the cancellation of Gilligan's Island instead). 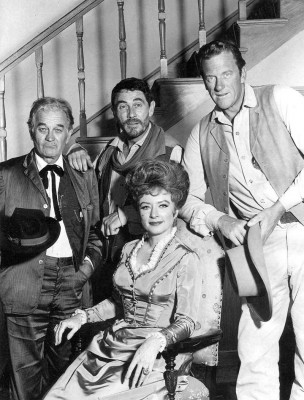 More so than in the earlier, half-hour Gunsmokes, one-shot characters played by guest stars assumed larger roles in the teleplays. Matt, Kitty, Doc, and Festus were more often on the sidelines, with the guest characters conferring with one or more series stars for advice or asking for their help. Sometimes there would be medical issues requiring Doc Adams's services, other times there would be a legal dispute or criminal act compelling Matt to step in and help resolve, or maybe an old friend or relative of Kitty's or Festus's would turn up. Other shows, however, do focus on our leading characters.

The switch to the hour format initially hurt Gunsmoke with half-hour plots at times shamelessly padded to an hour's length. By Season 12 this seems largely resolved. Basically, the superior, tauter half-hour shows tended to present Matt (or other leads) some sort of moral dilemma, with scripts built around a single, confined problem or incident, such as how to take a gunslinger alive when he's holed up in a barn with a hostage, or Matt coming to terms with having to shoot an old friend. Many of these shows were rich character pieces with little in the way of a conventional plotting.

Conversely, the hour Gunsmokes, once the issue of padding had been resolved, are more centered around plot and storytelling rather than character vignettes and intriguing little think pieces. Fortunately, these plots and stories are usually pretty compelling, and the seasoned cast always does an excellent job selling the material.

James Arness, onetime protégée of John Wayne, remains Gunsmoke's anchor both onscreen and off. After so many seasons Arness by all accounts took a relaxed, paternal approach to his company of actors and crew. He famously treated bit players and lowly grips with the same respect accorded to important guest stars (such as, in this season, "Miss" Bette Davis). Apparently, for instance, he often made sure bit players like Glenn Strange (as Sam the bartender) got a line or two in each script to ensure them a higher rate of pay, and hired the same people over and over again.

Watching Gunsmoke in color is alternately thrilling and odd. Although the show continued shooting extensively on location and, occasionally, Western backlot streets, it also relied heavily on a huge exterior-interior set of Dodge City's main street, built on a soundstage at CBS Studio Center, in the Valley just north of Hollywood. This expansive set, with its forced perspective and painted sky backdrops, fared reasonably well in the black-and-white shows but looks singularly unreal in color. Even when the show was still in first-run it seemed terribly "fake" to my then-child eyes. TV sets of the day tended to greatly overscan the broadcasted image, but on DVD occasionally the overhead studio lights or lip of the cyclorama are sometimes briefly glimpsed.

Despite starring in their own concurrent series, Star Trek, Gilligan's Island (which spoofed Gunsmoke on its own sets), and Mission: Impossible, respectively, both William Shatner, Alan Hale, and Martin Landau all found time for showy guest shots.

Now in color, Gunsmoke looks great on DVD. It appears that the original opening title elements were in lesser condition, possibly owing to sponsor placement in their originally-aired versions. These look a tad blurry, but the episodes themselves look wonderful, with rich color and excellent detail. Fifteen episodes are spread over four discs. The Dolby Digital mono (English only) is clean and clear, and the shows include optional English SDH subtitles. The packaging allows viewers to read the episode descriptions inside the snap case.