The late 70s and early 80s saw a number of treasure-hunt contests- first in the form of novels where the first one to guess where the money or treasure in the story was hidden would win that as a prize, and then a couple direct-to-video programs- the most famous being Vestron Video's "Treasure: In Search of the Golden Horse" from 1984 which was so out there that nobody could correctly provide the answer. In 1987 Dino DeLaurentiis got the idea to do a movie centered around a contest after seeing people lined up to buy lottery tickets. What we got from that was this smaller-scale knockoff of It's a Mad, Mad, Mad, Mad World starring some of the era's "up and coming" comedians, some of whom went on to bigger things and some fading into obscurity. 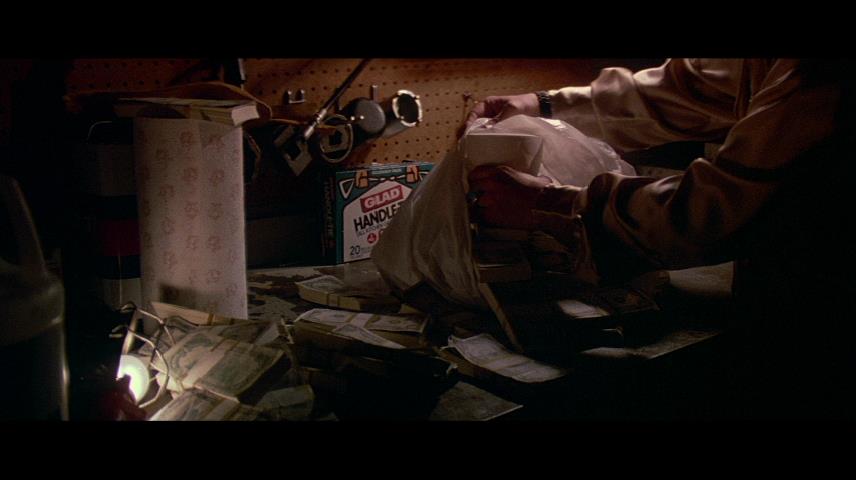 The setup here is that a former White House aide played by Tom Bosley (spokesman for Glad trash bags, which sponsored the contest and has some product placement here) stumbles into a diner in the middle of Arizona and drops dead- his last words tell the people gathered around him that he's hidden four stashes of a million dollars each, and they're there for the taking. This prompts the "wild and crazy people," including the diner owner (Royce Applegate) and his sister Dotty (Pam Matteson) who close up shop, to hit the road and make a mad dash to figure out where these stashes are hidden and grab the loot all for themselves which was a bit more challenging before the invention of GPS devices and internet-connected cell phones. Among the would-be millionaires are a geeky newlywed couple (Eddie Deezen, who's made a career of playing the same character, and Wendy Sherman) driving a pink Volkswagen Thing, a family taking a trip in a Volvo station wagon (mom and dad Rick Overton and Mona Lyden with their kid played by Douglas Emerson, who later played my favorite character on "Beverly Hills 90210" but was soon killed off) and a would-be rock star (Daniel McDonald) with his three girl backup singers (Penny Baker, 30th Anniversary Playboy Playmate Tawny Fere and LeGena Hart) who are only with him because he's promised them connections to stardom through other big-name artists he supposedly knows. The contest element comes after three of the stashes are found but the last one is still out there- audience members had to figure where it was and actually win a million dollars. The movie gives that answer only very subtly, but additional printed clues were also on printed handouts at theaters, in Glad trash bag packages and even the movie's soundtrack LP (which I wonder if anyone bought.) A few people got the answer right and the winner was selected in a drawing.

As a movie, Million Dollar Mystery doesn't really stand on its own and I'm surprised that it's gotten this Blu-Ray release- I was already surprised when Anchor Bay released it on DVD in 2007. Before that I had picked up the initial laserdisc from HBO (which is horribly panned and scanned and has the prompt for the audience to find the last stash cut out) figuring it would never be issued again. While treated as a comedy with a few car chases and things getting destroyed for good measure, most of it is painfully unfunny. A running gag has Deezen and his girl pulling over to have as much sex as the PG rating will let them, accompanied by some synth-sampled porno moans and groans. You'd think they'd at least wait til after they found the money and not give the others the lead. Kevin Pollak appears as a cop trying to keep the treasure-hunters in line and possibly grab the money himself- he tries to make this role funny by doing many uninspired celebrity impersonations, including of course then-President Ronald Reagan which many would-be comedians of that era felt was the height of humor. By the time pro wrestlers HB Haggerty and Bob Schott appear and join in the chase, you feel like just throwing your arms up in despair. Although by this point everyone agrees to work together and split the winnings rather than compete against each other, most of the time they act like crazed game show contestants (who are usually told offscreen to act as frantic as possible) and leave the audience feeling insulted that they'd be expected to care about what happens to them. Douglas Emerson as son Howie is the only sane one of the bunch- first trying to be the voice of reason to his manic parents and then just standing back to watch the often disastrous results. For good measure, there's another gag with a rental car that talks, a short-lived feature on autos of that era- only this one speaks Spanish and the drivers can't understand it. As a fan of bad movies however, I still find this movie amusing because of how unfunny it is which is a hard point for comedies to hit- if they fail at being funny, that failure often just annoys me rather than making me laugh at its sheer stupidity (for reference, I consider Ace Ventura, Pet Detective one of the worst comedies I've ever seen and will probably never watch again. Your mileage may vary.) The contest angle makes this movie much more significant to me than it otherwise would have been- it's said that this movie made less than a million dollars at the box office however so with the real payout it was a huge money-loser in the end. 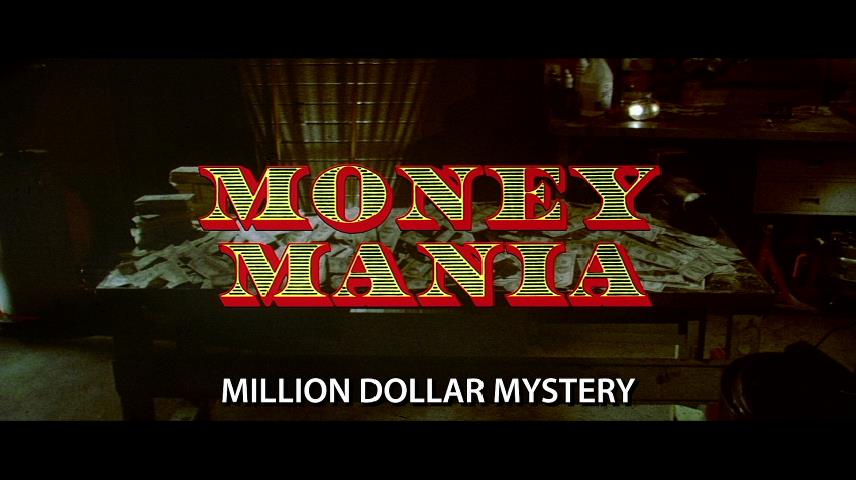 One caveat I will bring up right away about this disc is that it uses the title "Money Mania" with "Million Dollar Mystery" in an electronic sub-title. I've heard this was a foreign video release title but can't be certain- like the previous DVD it at least retains the full ending unlike the initial 1987 video release (although some say that may have still been different also) but my obsessiveness is still bothered by the title change and will still consider the DVD the definitive version. Now on to the technical nit-picking: 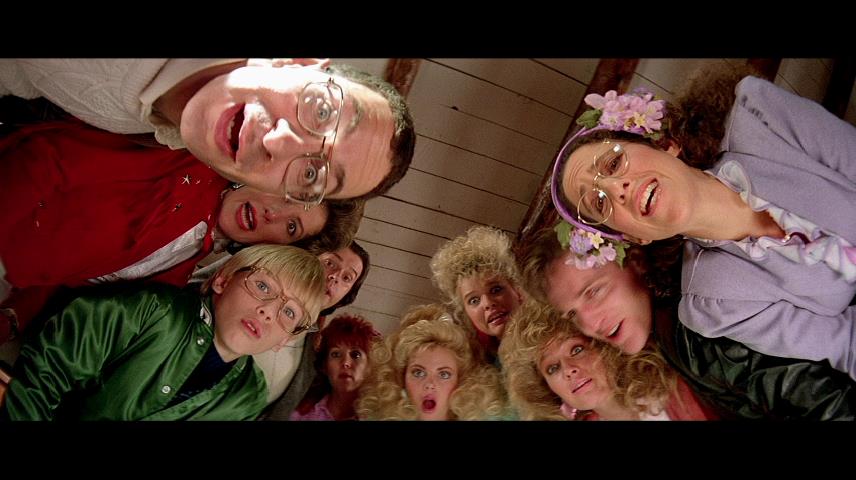 The 2.35 aspect ratio is maintained, a relief if you've only seen the old pan and scan transfer. I thought the DVD looked quite bad by modern standards, with a very rough picture quality overall, but this hi-def transfer still looks a bit rough itself. (The old video transfer looks very soft in comparison.) Only the few who saw this theatrically can say how it was intended to look. Kino at least gives this a generous dual-layer disc so compression isn't an issue like it was on the Anchor Bay DVD.

Audio was done in Ultra-Stereo, the poor man's Dolby but meant to be played the same way. The quality is typical of stereo mixes from this era, with dialogue centered with music and some directional effects filling out the other channels. Subtitles showing dialogue and song lyrics are included. 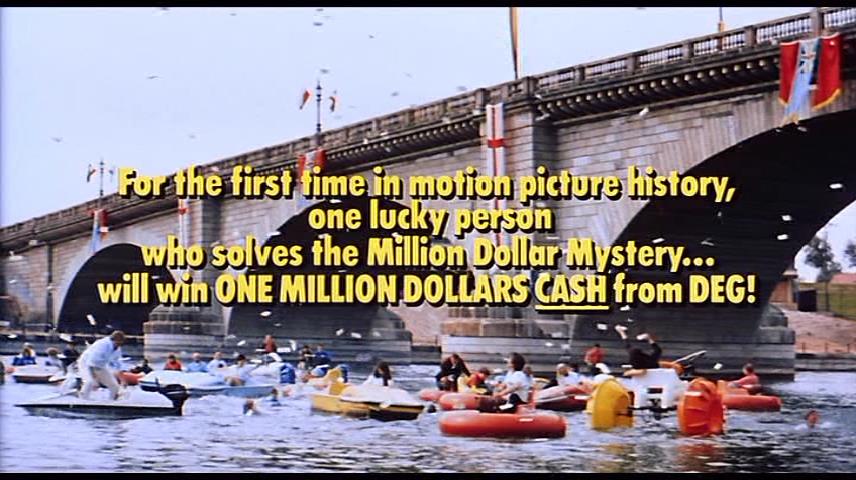 While unable to get anyone directly associated with the movie, Kino again enlists a journalist to provide a commentary- this time it's Bryan Reesman. I had hoped to hear some extensive info about the contest that accompanied this movie's release (mainly having clues in the movie pointed out) but it isn't talked about too much, only telling the answer and who the winner was but not really how the answer was figured out. (I've seen pictures online of the game cards which give far more obvious hints than anything in the movie.) Instead as usual for commentaries on Kino discs, much of the talk is about the overall careers of the cast and crew but he does explain just what the deal was with that black-and-white segment in the detective's office. The trailer is included in standard-def along with ones for Honky Tonk Freeway, Moving Violations, Running Scared and Bank Shot. 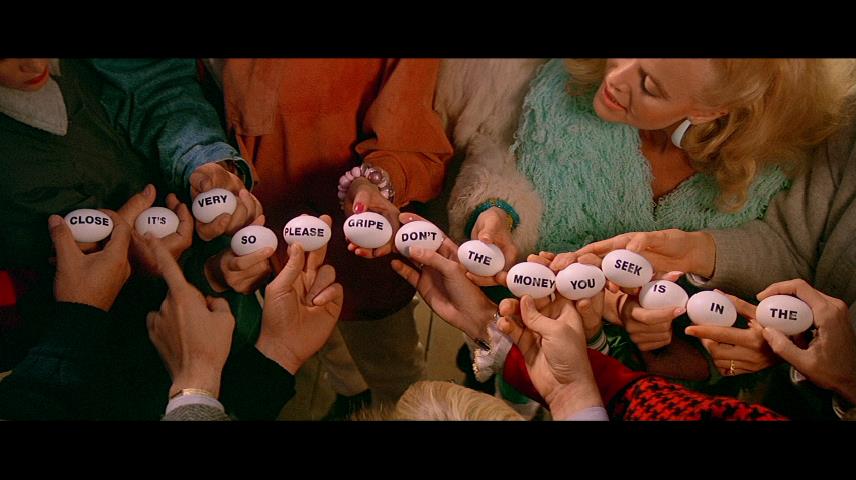 I never expected Million Dollar Mystery to have much of a shelf life beyond its initial release- given how flawed the original video release was it was a miracle enough that a DVD came out later. The Blu-Ray picture quality still isn't a huge improvement however, and the use of a print with an alternate title wreaks havoc with my insistence that movies in my collection be identical to their original theatrical versions. My Rent It rating is about the midpoint of several verdicts I have for this release- anyone seeking something that even resembles a good movie should just Skip it, but if you've never seen this before and are as fascinated as I am with movies that have such strange tie-ins and/or were huge flops I'd recommend it, however given the title change and not-much-improved picture quality I would suggest the Anchor Bay DVD instead if you can find it. 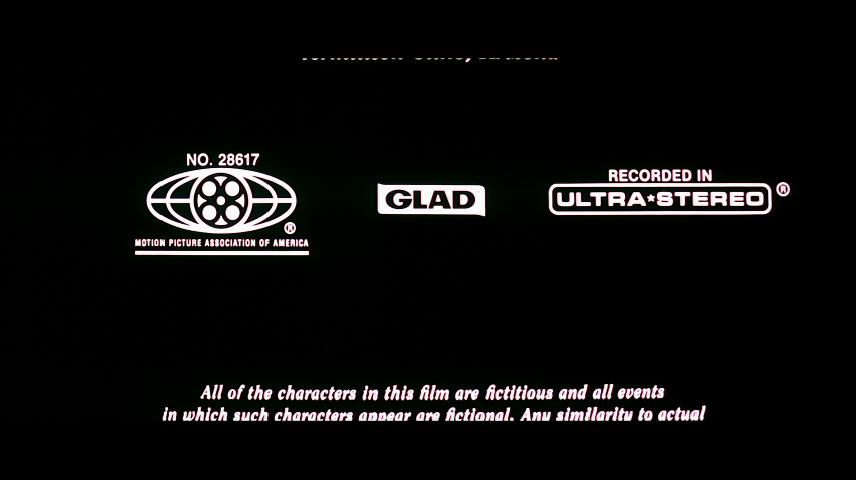