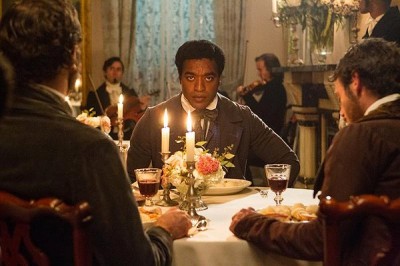 I haven't heard so much sniffling from the critics row since Toy Story 3.

I say this not to trivialize or make light, but more to indicate, for as much as it seems like a lot of the critical establishment operate within one hive mind, it's uncommonly rare to witness them reacting in the same way to the same movie. Such was the case, however, with 12 Years a Slave, Steve McQueen's powerful drama about an extraordinary individual from one of America's most shameful historical periods.

Solomon Northup was a black man living in freedom in upstate New York in the 1830s who, in 1841, was kidnapped by two men who had hired him for his fiddle-playing skills and sold as a runaway slave. Over the next decade, Northup, renamed Platt, had several different men take ownership of him and force him to work in his fields. It wasn't until he convinced a traveling Canadian to get in touch with his people that anyone knew where Solomon had gone. 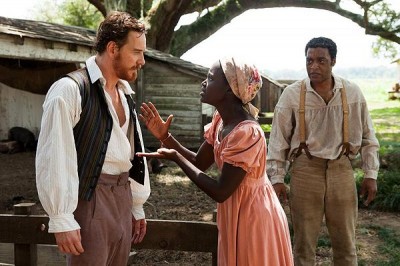 That's the long and short of McQueen's adaptation of Northup's memoir, written for the screen by John Ridley (U Turn, Red Tails). Northup is played by Chiwetel Ejiofor (Serenity, Kinky Boots), who is exceptional in the role, portraying a man struggling to retain his pride and even his sense of self. Over the course of his enslavement, his captors attempt to break him down, succeeding in some areas, but not in others. He maintains his compassion through most of the story, and finally finds his way out at the point where he is nearly forced to let it go.

The succession of slavers and owners that Northup contends with are played by a solid cast of character actors and leading men. Paul Giamatti (Sideways) plays the trader who first takes possession of Northup. It's a cold portrayal, setting up the ongoing depiction of white men treating black men and women as property to be traded, used, and sold. Benedict Cumberbatch (Star Trek: Into Darkness) is Ford, the first to buy Northup. He is a man with some moral struggle, but who doesn't have the courage to go the distance, being more concerned with his financial standing than the pangs of kindness or guilt that might otherwis plague him. When Northup runs afoul of one of the plantation overseers (There Will Be Blood's Paul Dano at his most vile), he sells his "mortgage" to another plantation owner, one with a more notorious reputation for being hard on his slaves. Michael Fassbender (the star of McQueen's previous films Hunger and Shame) plays Edwin Epps, delivering a performance that is both riveting and revolting. Epps is a complex, psychological portrait of evil. He lords over his slaves not just for the work he can beat out of them, but for the charge he gets from having power over other men. He is a drunk with a twisted take on religion, and a pervert who sexually exploits the women he has purchased. His favorite, Patsey (Lupita Nyong'o), is one of the more heartbreaking figures in the film. Northup keeps insisting that he will not give in to despair, but despair is all Patsey has to call her own. 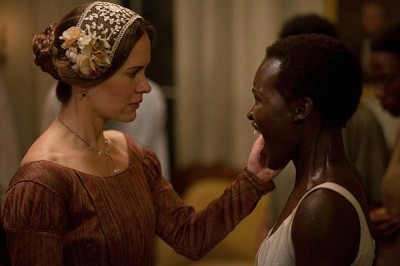 McQueen pulls off a delicate balance between showing the real-life horrors of slavery and being exploitative. 12 Years a Slave has plenty of violence and blood, and as liberal a use of the N-word as Django Unchained, but there is never a feeling that the authors want us to experience the same thrill that Epps experiences from either. In fact, McQueen is not unlike Quentin Tarantino in that he knows to withhold some of the grisly details until it matters. The whipping of Patsey 3/4 into 12 Years a Slave is just as sickening as the dog attack that unsettles Christoph Waltz's Django character. Granted, that's pretty much where the comparison between the two films ends, but it's worth noting that for as different as they are, this similarity perhaps shines a more favorable light on Tarantino than putting the two together otherwise would.

To be honest, when I saw the initial trailer for 12 Years a Slave, I was a bit concerned, as the scenes chosen and the use of music made it look more like McQueen was making Lincoln Without Lincoln, eschewing the hard-edged material he's generally been known for in order to toss some bait toward the Oscar podium. Nothing of the kind occurs here. His mis-en-scene favors suggestion over explanation, working in tandem with Hans Zimmer's surprisingly atmospheric and even abstract score to create a sense of unease in the audience. When Northup is on the slave ship after first being kidnapped, the rumbling low tones of the music have a physical effect on the listener, attacking the audience in its gut, creating a feeling of nausea and dread that McQueen maintains throughout 12 Years.

There is an exchange between Cumberbatch and Giamatti where Cumberbatch's Ford asks the slave trader, the ironically named Freeman, if he has no sentimentality. Freeman responds that he does, but it extends no further than the "length of a coin." McQueen and Ridley seem to have a similar credo. In fact, the dispensation of sentimentality is practically a running theme of 12 Years a Slave. For instance, when the woman (played by Pariah's Adepero Oduye) sold with Northup can't stop crying over her lost children, she is taken away, sent somewhere where they will no longer have to hear her weeping. This is how they break the captured man down: by surgical excisions of any honest emotion.

This is what makes the ending of the film worthwhile. The sentimentality is unchained along with the Solomon Northup. We are allowed to feel something positive again after two hours of sadness and cruelty. It's why there were so many tears being shed and/or stifled in the theater: we had come out the other side of 12 Years a Slave with our humanity intact. 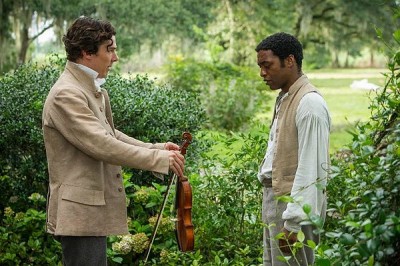