Dawn of the Planet of the Apes (3D) 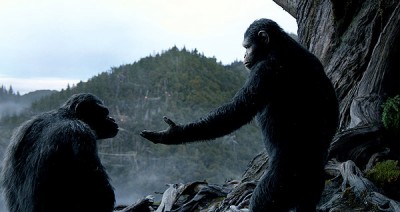 Matt Reeves does what every good franchise director taking over mid-way should: he bests the original while advancing the story and making you hungry for more. Granted, I was one of the few on the fence about Rise of the Planet of the Apes, the 2011 debut in the series, and my bias meant that I would declare any follow-up that had 98% less James Franco as a triumph, so the fact that Matt Reeves took care of that and also took Dawn as far above and beyond the last go-round is really just icing on the cake.

In terms of particulars, as the opening credits roll, we get a quick catch-up that lets us know that Dawn is essentially what happened after Gwyneth Paltrow sneezed on that guy's fruit salad in the casino in Contagion, but with gorillas. As a result, the bulk of the planet's hairless population has had a conscious uncoupling with this mortal coil. So much so, in fact, that Caesar and his community of fur-covered bipeds haven't even seen one of the fleshy ones for two years. This all changes when a research team led by The Hurt Locker's Jason Clarke and The Americans-badass Keri Russell stumble into ape territory while checking on the condition of an electricity-generating dam outside of San Francisco. (As with Rise of the Planet of the Apes, the humans in Dawn are largely forgettable as characters and so most easily referred to by the actors' real names.) It seems a bunch of survivors have moved into the city, only to find no one cleaned it up after Godzilla left. They are running out of fuel and need an alternative source of energy. 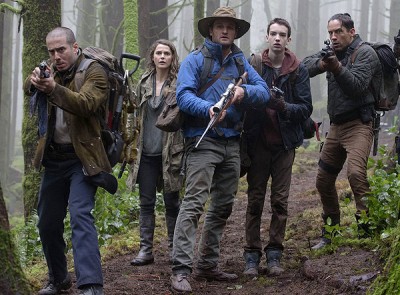 An uneasy truce is struck with Caesar, though not to the agreement of his simian secretary of state, Koba. Not all the humans are necessarily ready to accept their evolutionary forebears, either. Gary Oldman is in charge of the Bay Area colony, and he's amassing weapons just in case Jason Clarke and Keri Russell pull a Felicity-level bungle and, I don't know, shave one of the monkeys or something.*

Seriously, strap in for some political intrigue. Once you see how Caesar and Koba go at it in the Chimpanzee Congress, you'd wish John Boehner and Harry Reid would just go ahead and roll around on the floor and pound each other into hamburger. The two major apes are performed in voice and as motion capture by Andy Serkis and Toby Kebbell (the latter replacing Christopher Gordon). Once again, the actors and their team of special effects wizards create a believable population of computer-generated animals. Each with their own personality, capable of drawing out our very real human emotions, and hell, even cracking wise here and there. Don't be surprised when Caesar's baby son steals the show. Apes are cute, yo! And more lifelike than James Franco. These guys can actually keep their eyes open, even when the superfluous 3D starts to make yours bleed.

The back half of Dawn of the Planet of the Apes is mainly devoted to action, and it's raucous fun. Reeves really knows his way around a fight scene. He constructs some pretty exciting combat sequences, and he doesn't just rely on mayhem and destruction to carry the day. Dawn displays many an instance of bravura filmmaking. Crane shots, uninterrupted tracking shots, and a clarity of choreography lend a breathtaking immediacy to the action, especially since you can never tell where Michael Seresin's real-life cinematography ends and the green-screen fill-ins begin. (It's no surprise that Seresin also shot the best Harry Potter, The Prisoner of Azkaban.) It's old-school technique enacted with new-school cool. Even the music from Michael Giacchino (Mission: Impossible - Ghost Protocol, Let Me In) has a bombast and a playfulness that often hearkens back to the Planet of the Apes franchise's 1960s origins.

To be honest, I went in cautious and came out overwhelmed. Dawn of the Planet of the Apes is another example of spectacle done right. A clear narrative selling us its illusion through good (albeit non-human) characters and amazing special effects, and not relying too heavily on one or the other to make it work. See? These kinds of films can have intelligible story lines that you actually care about. You don't have to turn off your brain because Dawn knows you're more than a big dumb ape. 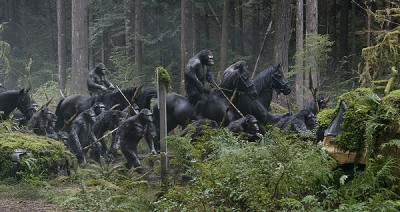 * Obligatory reference to an ape as a monkey just to goad someone into correcting me. I'm going to do it every time.