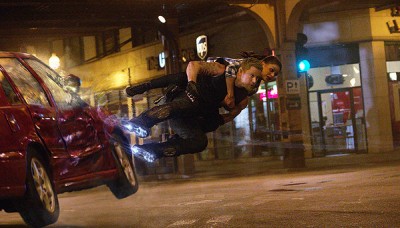 It's easy to push against a movie like Jupiter Ascending. You can call it messy and overlong and a bit nonsensical and make a thing about how the studio delayed it 9 months from last summer and spun the story by saying it was required to give the Wachowskis time to finish all the special effects.

Because all the endless reboots and remakes and double-downs have made us cynical, and so why support a movie full of crazy ideas and passion that doesn't take itself too seriously? Why, indeed.

Look, Jupiter Ascending is not a great film. It's full of strange logic and ridiculous off-hand concepts and it drags in spots and actually really is overly long. But it's also an original creation, plucked fully from the over-achieving brains of the people who brought us The Matrix and the often criminally misunderstood Cloud Atlas. Andy and Lana Wachowski played around with anime before when they made The Animatrix, but Jupiter Ascending is them making a big-screen, live-action bouillabaisse of all the Japanese cartoons they adore and having a grand old time, and frankly, love it or hate it or walk away somewhere in between like me, you gotta respect that. Just like we had to do last year with John Wick, which starred their "One" as a man with a vengeance. Or Edge of Tomorrow or Snowpiercer, which sure, were adaptations, but nothing else was quite like them. All three of those movies were better than Jupiter Ascending, I have to include that caveat, but goddamn, RESPECT.

Jupiter Ascending stars Mila Kunis and human fan-art Channing Tatum as a sci-fi fairy-tale queen and the wolf at her door who turns out to be a prince charming and yes this whole thing is that overloaded. Kunis is Jupiter Jones, the intergalactic reincarnation of the mother of a bunch of brats who rule the universe somewhere outside puny Earth people's understanding and mine the various planets in their control for resources that extend beyond the usual oil and treasure. Of the formerly deceased queen's immortal offspring, they each have reasons to want her alive or dead, the least of which is her ownership of this big blue marble we all sit upon, a land deed that should have gone to her most uncomfortably Oedipal son, the supremely douchey Balem (Eddie Redmayne, who is so incredibly awful here, I swear within that breathy rumble he's adopted he's actually whispering ever so subliminally, "I'm terrible and I don't deserve the Oscar nomination, much less the award"). Tatum's Caine, a human/wolf hybrid who rides around on anti-gravity rollerblades that would make Marty McFly say "Whoa," has been hired by middle child Titus (one-time Romeo Douglas Booth) to grab the Queen before his brother or their sister (Tuppence Middleton, The Imitation Game). Once Caine realizes who his quarry really is, however, all bets are off.

And so we have an explosive fight between Magic Mike and aliens in downtown Chicago. And then between a shirtless Magic Mike and aliens in rural Illinois, this time with the help of Sean Bean as a space cop named Stinger who also likes to keep bees and says "Beeswax!" as a curse. (Bees! Stinger! Get it...?) Then there is a fight in space between Magic Mike (sadly, with his shirt back) and Romeo. But that's after an homage to Brazil that contains an honest-to-god cameo from Terry Gilliam. Then, of course, Jupiter Ascending starts doing what we all want to do and punches Eddie Redmayne in his overacting face and hits him with pipes. Plus, all kind of plot stuff in between.

Not to mention plot holes. Why not take away Channing Tatum's space rollerblades? Because that would ruin the movie, that's why. Let's not think on that kind of stuff too long.

Jupiter Ascending is pretty fun, though it dips and drags whenever any two characters speak more than five lines of dialogue. And Jupiter's stupid Cinderella-story helpless-love nonsense is a waste of some good Mila Kunis. But again, let's not think on that. 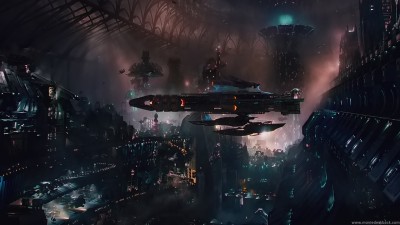 Because wow, is it a technical marvel. Say what you will and be as skeptical as you want about that alleged pull-back to work on the effects--those nine months are up there on the screen. We get insane multi-faceted spaceships and several extensive cosmic kingdoms, with nods to Roman architecture and Flash Gordon, and what the hell, is that an elephant alien named after Ganesh? The Wachowskis pack their movie with so many blink-and-you-might-miss them details, you'd wish someone would let you take your 3D glasses off to look at them properly. And pray people around you aren't talking, because so many crucial details pass by in expositional dialogue like they were nothing. Fight scenes are chaotic and overblown, and Tatum skates over fire and through glass, but you know, the people always look real. They toss Mila Kunis all over the place, but it always looks like the living, breathing Mila Kunis, and not a rubbery video-game refugee.

So, put all those complaints about Jupiter Ascending's flaws in one hand, and all the batshit ideas the movie gathers together in your other hand, and then toss the complaints over your shoulder because you're really going to need both hands to pick all this other stuff up and mash it all together.

Just the way the Wachowskis did. 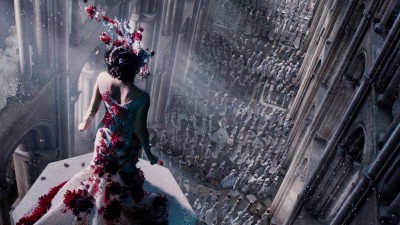