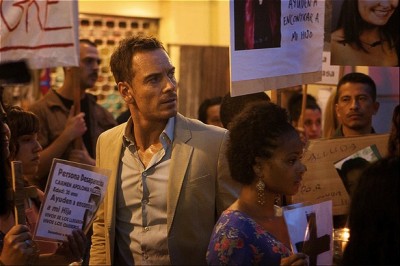 Following the successful Hollywood adaptations of his novels No Country for Old Men and The Road, author Cormac McCarthy bought himself a copy of Final Draft and decided to skip right over the novel part and write a screenplay of his own. The outcome is The Counselor, a multifaceted crime film directed by Ridley Scott (Blade Runner, Robin Hood). It's a mostly solid effort that looks good but is otherwise dead around the eyes and a little long in the tooth, suggesting maybe McCarthy needs the judicious scissoring of an outside translator to save him from his own worst tendencies.

Michael Fassbender (Prometheus, Shame) stars as the nameless lawyer who is the movie's lynchpin. Finding himself in dire financial straits, he teams with nightclub owner Reiner (No Country's Javier Bardem, looking like he's auditioning for Wreck-It Ralph in loud cloths and a fright wig) and mysterious bad dude Westray (Brad Pitt, World War Z) to bankroll the smuggling of a bunch of drugs from south of the border. The payout will get the counselor back on his feet so he can go ahead and marry his girlfriend Laura (Penelope Cruz, Vicki Cristina Barcelona). He's asked more than once by his new business partners if he's ready to cross the line to become an outlaw. The counselor insists that he is.

Which, of course, means he's not. As such schemes are wont to do, the smuggling goes all wrong, and The Counselor becomes a convoluted morass of double-crosses and half-explanations and not altogether clear motives. The build-up, admittedly, is interesting, with Scott and McCarthy shaking up their box of dice and seeing what numbers come up. There is an amorality to The Counselor that is played with admirable clarity. No real judgments are made, no ethical equivocating. This allows for a surprising coolness, with none of the adolescent buffoonery seen in similar drug smuggling movies, like Oliver Stone's dreadful Savages. Excess is not celebrated. On the contrary, Bardem's flashiness is seen as a liability. More preferable is Pitt's icy efficiency. In another age, he might have been the antihero of a Jean-Pierre Melville movie.

Tragically, things start to go bad for The Counselor the worse life gets for its characters. The final act is too long, with the movie just spinning its wheels and never finding ground for a satisfying resolution. Some of the extended running time is presumably there to allow McCarthy to write a couple of the portentous monologues that he's known for. One of them, delivered by Ruben Blades (Assassination Tango) as a philosophical drug lord, works. The rest are superfluous. We get it. In the drug wars, life and death are meaningless. Underline the point any harder and your pen might rip through the paper, Cormac!

The cast does its best to hold The Counselor together. Fassbender and Cruz are the strongest, but their parts also have the most varied emotions. Everyone else does pretty well with the single notes they are given to play. Cameron Diaz delivers a fairly good effort in a traditional femme fatale role, even if some of the seductive grace and sharp language eludes her. Rosie Perez (Do the Right Thing), Bruno Ganz (Wings of Desire), and John Leguizamo (William Shakespeare's Romeo + Juliet) also make the most out of single-scene cameos.

Their efforts make The Counselor passable, even allowing one to forgive rookie screenwriter mistakes (every mode of killing in the climax has been telegraphed in ways that would make Chekhov blush) and Daniel Pemberton's on-the-nose scoring. Still, there are a lot of flaws, so much so that the scales nearly tip the wrong way. If only McCarthy had some kind of real ending or something of note to say, The Counselor could have staked a solid claim over some excellent cinematic territory. 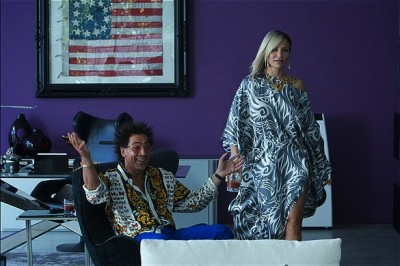