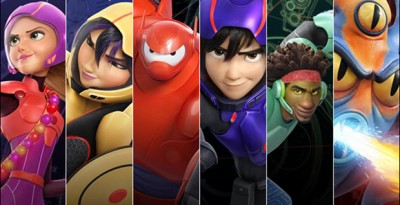 While I was watching Big Hero 6, a fire alarm went off in the middle of the movie and a calm, mechanical voice suggested that everyone should leave the theater. It was right when the young superhero team was going into battle for the first time, arguably what was intended to be the second most exciting sequence in the movie. The fact that I found the flashing lights on either side of the screen more interesting than anything on it and secretly wished there was a real fire so I wouldn't have to sit through the rest of the digital cartoon should tell you most of what you need to know about my feelings about Big Hero 6. No such luck for this tired old grump.

The latest 3D animated feature from Disney is their first to work with characters that have been under their umbrella since they bought Marvel Comics. Big Hero 6 is loosely based on a bunch of characters created for the printed page by the Man of Action collective*, who are best known in cartoon circles as the creators of Ben 10. The basic set-up of Big Hero 6 is that in an indeterminate, technologically advanced future, cultures have melded and robots are the next big thing. In the inexplicably named, difficult to pronounce San Fransokyo, a young boy named Hiro (voiced by Ryan Potter) is wasting his intelligence and talent building battle bots for underground fights. His brother (Daniel Henney) encourages and inspires him to apply his skill to getting into the prestigious research academy where the older boy is developing a big and bouncy medical robot named Baymax (Scott Adsit, 30 Rock). 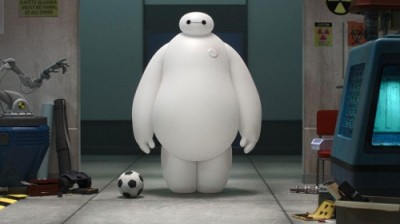 Hiro gives it a go, but on the night that would otherwise have been his greatest triumph, the science fair catches fire and Hiro's brother dies trying to save his mentor (James Cromwell, Babe) from the blaze. (Normally it's the mom who dies to inspire the protagonist to action in a Disney movie, but in Big Hero 6, they are stacking the deck: Hiro's parents are already dead.) When the distraught teen discovers that the fire appears to be a cover for someone stealing his invention, he outfits Baymax for battle and also recruits his brother's friends, using their own inventions to turn them into superheroes. The unlikely team consists of Honey Lemon (Genesis Rodriguez, The Last Stand), who has a super sticky freezing substance she tosses around; Wasabi (Damon Wayans, Jr., New Girl), a dude with laser knives for hands; Go Go (Jamie Chung, Sucker Punch), a gal with multipurpose discs that double as weapons and a mode of transport, making her a cross between the gladiators in Tron and the Wheelers in Return to Oz; and Frank (T.J. Miller, HBO's Silicon Valley), whom Hiro builds a suit that makes him look like a refugee from the Power Rangers rogues gallery.

Together they are Big Hero 6, and they chase the villain that took Hiro's invention. He will be someone they do not expect (shock!), and they will fail in their first battle (horror!), but after the requisite pouting followed by the expected rallying moral lesson (hooray!), the team will regroup and win the day (inevitable!).

Big Hero 6 was directed by Don Hall and Chris Williams, the directors of Wreck-It Ralph (which I also didn't like, if you need a grain of salt to take me with), and overseen by Pixar main-man John Lasseter. The character rendering matches the rubbery computer generated animation seen in Tangled, Ralph, and Frozen, with the same interchangeable facial structures, like the animation teams just keep playing with the same sets of ancient Thunderbirds toys and hoping no one will notice. For the most part, audiences have no problem with this when the movie is good, but Big Hero 6 is most definitely not. It takes just about every comic book cliché and throws them into a Pixar cuisinart and tries to make something new and family-friendly via melding the various Disney brands, but what comes out the other side is dull and predictable and lacking in any clever spin on the material. It seems more market tested than genuinely felt or constructed--which might explain how they made the cast more ethnically diverse than the original comics while simultaneously whitewashing other characters, a true feat of racebending if ever there was one. Anyone hoping for another Incredibles should just go ahead and watch that movie again. Or how about some episodes of Ben 10 or Generator Rex?

I'm at a loss of what else to really say. Outside of a few jokes, most of them having to do with how strangely sweet Baymax can be, there's just nothing here that worked for me. The story, despite treading over well-worn ground, is full of holes. The world the animation team builds lacks definition, the futuristic touches being sparse and indistinct. (Like, what's with all those weather balloons or whatever they are?) The action is muddled and poorly choreographed. In the epic climax, which itself falls into the same trap as so many recent superhero movies and just ends up being a cacophony of wanton destruction, there is no sense of place, no organized plan of attack. The team doesn't even operate as a team. They are just a handful of individual players spurred on by the cloying platitudes Hiro learned in the scene immediately prior. The villain is actually kind of cool looking, and animated with a realism that many live-action capes-and-cowls movies could do well to copy, but his backstory has maybe the biggest plot hole of all, and the resolution is the kind of cop-out concession that makes me glad all the regular Marvel movies are PG-13 and not aimed at the grammar-school crowd. (The kids in my audience seemed mostly entertained, but more ambivalent than engaged.)

And don't even get me started on the pointless 3D. Save your money on the glasses and see it in 2D if you don't otherwise skip over Big Hero 6 altogether.

If you do see it, sit through the whole thing, comic book nerds will appreciate a post-credits sequence. Also, get there early to catch the short cartoon before the main feature, "Feast." Patrick Osborne's story of a boy and his dog and their love of food is charming and funny, and the canine behavior is keenly observed and animated with adorable accuracy.

* Full Disclosure: Over the years, I have worked with different members of Man of Action in connection to my comic book career. I have not, however, read any of the Big Hero 6 comics, whether written and drawn by them or anyone else.